The Dress: I Just Knew

I’ve returned a successful lady!!  And I am so sad I can’t share the dress that I bought.  You’ll just have to wait for the wedding pictures… but I promise it’s worth the wait.

Dress shopping was quite the experience, and in the course of a weekend I think I experienced nearly every emotion in the book… but the most significant came as a bit of a shock.

After purchasing my dress I found myself having a funny conversation with my friends.  They asked if I had “that feeling.”  The one that Hollywood tells you you’re going to have… that crazy moment.  But the funny thing about the conversation was not as I had expected… that I didn’t.  That the dress had just been the best I had tried on and through a process of elimination I had settled on it.  The funny thing about the conversation was that when I put it on… I really did know.

I was so scared going into this weekend.  I wanted to find a dress while my mom was here for her visit, but I was afraid I would have a hard time.  I was afraid I wouldn’t find it… or that I would feel so indecisive that it would take me forever to decide.  But, for me, the process was so much more simple than that.  When I put it on, I knew.

Now, that’s not to say that I was certain at that very moment.  There was one other dress that I loved, and I returned to the store a second time to try both on… to decide between the two.  But there was only one that gave me that feeling.

In the midst of our conversation, one of my friends laughed.  “I feel like we’re talking about love.”  And, in a way, we were.  Finding the right dress is so much like finding the right person… and when you do… you really do know.

It was nice to know that feeling really did exist.

But then… I’ve known for a long time when it comes to love.  And it’s nice to know he feels the same.  The best surprise of my weekend came when I walked into one of my bridal appointments and was handed this gorgeous arrangement. 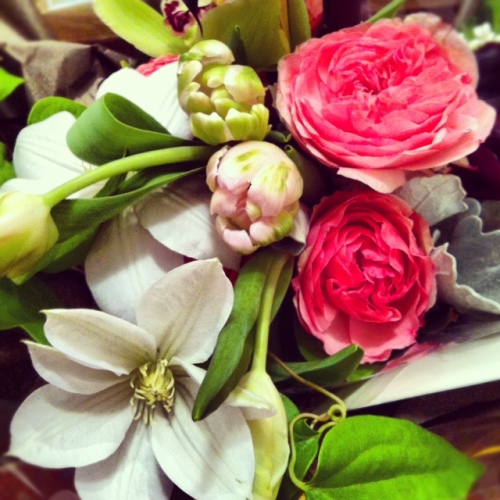 It was a very good trip.

Photos: Cubicle Refugee and my own.

Filed Under: Our Wedding
Tags: the dress

4 Comments to “The Dress: I Just Knew”